A revival of the FoodCamp that was unfortunately cancelled last year. Enjoy a course lunch with an abundance of local Oku-Aizu produce, such as Aizu-Jidori chicken and Kaneyama red pumpkins in the Misaka Highlands, right before sunflower high season. Chef Manabu Sato from restaurant ‘Teppanyaki Aizu-ya’ knows Aizu’s local products like no other. For the producer-visit, we will be welcomed by Aozi-jidori chicken farmer-, processor and seller ‘Aizu-Jidori Mishimaya’, and farmer of ‘Oku-Aizu Kaneyama Daishizen’-red pumpkins in Kaneyama. With the addition of a workshop of knitting-craft, this tour has a lot to offer!

Aizu-Jidori chicken's best feature is the sweet taste and elegant bite of its meat. Managing Director - Aizu-Jidori Mishimaya Co., Ltd. Kazuhiro KODAIRA
'Aizu Mishimaya' deals with everything from chicken breeding to processing and sales. Aizu-Jidori chicken meat has a rich, sweet taste and a firm bite. The company dates back over 500 years. Kodaira-san, the current president, equates his love for jidori-chicken with his love for the region.

It is said that Aizu-Jidori chickes were first brought to the region by an Ochudo (a warrior exiled after a defeat) from one of Japan’s famous historical families, the Taira clan. As evidence of this history, the decorative feathers used during the Aizu-Higanjishi festival, dating back the 1570s, are in fact of Aizu-Jidori chickens. This means this species was already inhabiting the region 400 years ago. In 1987, the then-critically endangered species started to be bred by a prefectural chicken breeding facility. It was during this experimental process that Kagoshima University learned that this species of chicken is completely different from hereto known species. The species evolved into its current state thanks to breeding processes. They are large, delicious and were even considered suitable for aesthetic purposes. 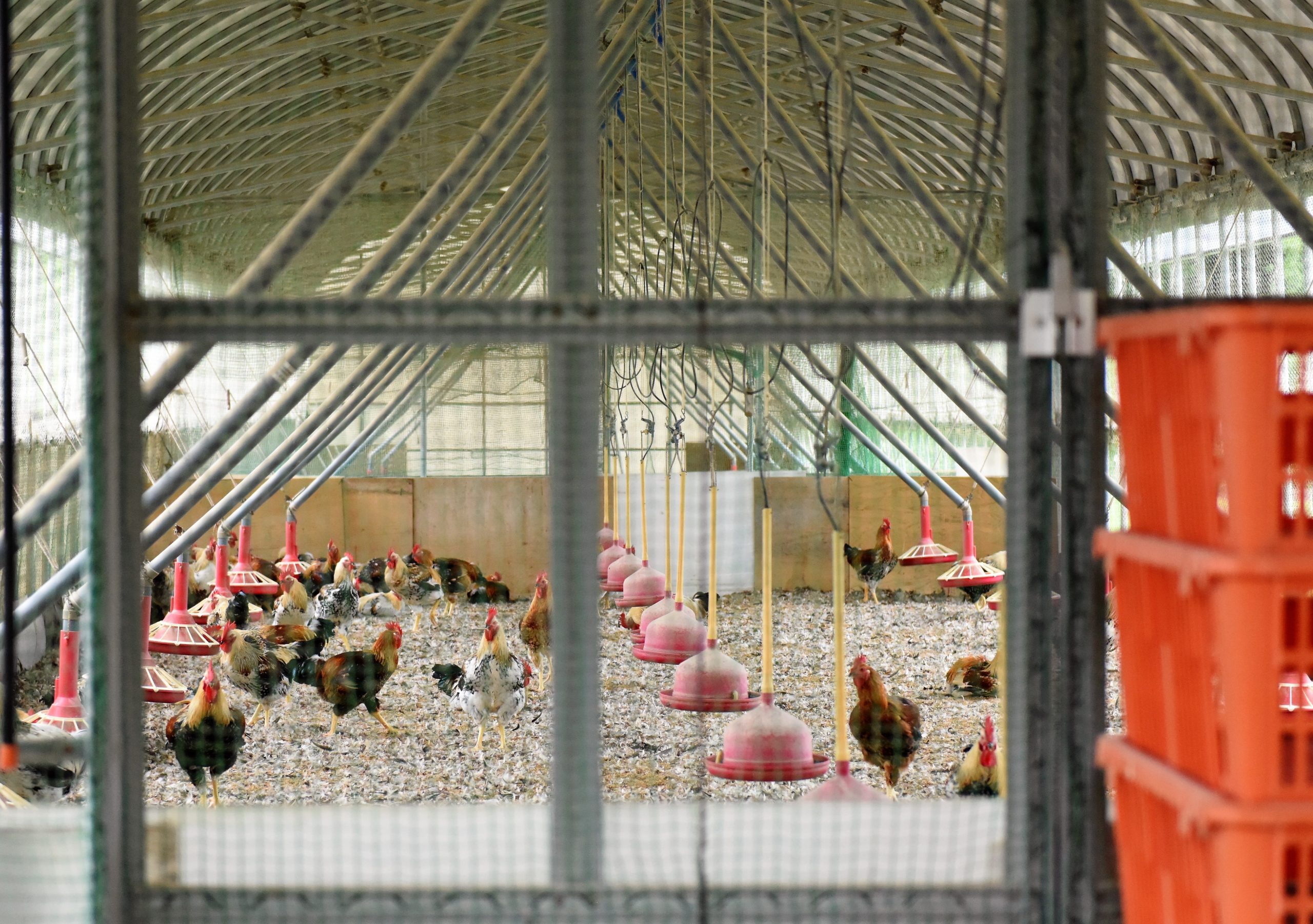 It started with a poultry-processing qualification

There’s a reason why Kodaira-san became the manager of Aizu Mishimaya. The town of Mishima designated Aizu-Jidori chickens as the town’s own local specialty product, and launched a company to promote the town using the chickens. However, in order to process the chicken meat, it had to be transported all the way to the city of Motomiya, making it only suitable for wholesale at first. Then, an idea began to stir: if the town had its own processing facility, that would mean the production, processing and sales could all be done within Mishima. This grand task fell on Tokyo Agricultural University graduate and poultry-processing qualification-holder Koidaira-san.

Kodaira-san’s mentor in college was an authority in the field of poultry-research, and some of his seniors had been involved in the Aizu-jidori research. Kodaira-san felt that this had to be fate. Aizu-jidori is an established brand now, but Kodaira-san received a lot of advice from his mentor in the early stages. After the 2011 disaster, the Oku-Aizu area faced bad publicity despite being hardly affected. Nonetheless, the production volume currently exceeds pre-disaster levels. Koizumi-san has always kept his head high, standing by high chickens, saying, “No worries, we can do this.”

As Aizu-jidori is not shipped to general markets, Koidara-san had to get used to doing sales. As there is a set method of raising Aizu-jidori chickens, which tends to be quite costly, this is reflected in the high consumption price. This is why he turned to restaurants as an alternative sales-route. Professional chefs have various very specific questions, which Kodaira-san ― thanks to his company both raising and processing poultry ― is easily capable of answering. He knowns everyhting about the raising process, the qualities of the meat, and differences in taste depending on the season. This is how he got restaurants to support his products, adding to the brand’s value.
Kodaira-san always goes in head-on, with true Aizu self-confidence and pride.

The smell of Aizu-Jidori on the hot plate is irresistible. Chef, Teppanyaki Aizuya - Manabu SATO
Chef Sato of restaurant Aizu-ya has been using Aizu-Jidori chicken from the very beginning. Kodaira-san is the producer he has worked with the longest. Together with Kodaira-san, chef Sato is dedicated to promoting Aizu-Jidori's quality, reflecting his deep feelings for Aizu's regional products.

Born in Aizu-Wakamatsu City, Chef Sato moved away from his hometown to go to college. However, he felt things weren’t quite right, concluded that “if it’s not for me, I should quit,” and dropped out. He moved back to his hometown, and decided to pursue a career in cooking, something he had always loved. His parents recommended a French restaurant in Shimogo Town they had a connection with, called Chez Yamanobe. When he went to check out the restaurant for himself, he was moved by chef Yamanobe’s cuisine. So much so, he spontaneously asked the chef, “Please let me work here!” which was rejected mercilessly. But he didn’t give up, and one his fourth time requesting the chef to take him in as a trainee, the chef finally caved.

Yet, Chef Sato was only getting started on his culinary journey, didn’t know how to properly hold a knife, had no knowledge, and was, in fact, an absolute novice. “It was very difficult, and the work was quite hard, but it is the experience of that time that keeps me going now,” Chef Sato reflects. One of the dishes on Chef Sato’s menu, Jagaimo-Tsutsumiyaki, is one he learned during these years of training. Chef Sato has the strong desire not to forget his early experiences.

Opening up shop with a ‘re-discovering-Aizu concept’

In 2009, Aizu-ya officially opened. That time, there were not that many restaurants that specifically used local produce yet. Chef Sato is adamant about visiting farmers and talking with them first before using their products in his restaurant. “I want to use products of which I know the farmers’ character, their land, and what vegetables are delicious. That’s all,” says Chef Sato softspokenly, conveying his sincere belief.

In his restaurant, Aizu-Jidori chicken is wildly popular, probably thanks to its sweet aroma when grilled. Chef Sato fulfils an important role, in conveying the taste of Aizu, and that of the local food producers. 4

Chef Sato and Kodaira-san have been working together ever since the restaurant first opened. Kodaira-san was an acquitance of Chef Sato’s father, and has become the chef’s longest busines partner. The respect Chef Sato feels towards Kodaira-san, as someone who shares his desire to bring high-quality Aizu-Jidori to the forefront, and as a fellow Aizu-citizen, is evident. They share a strongh desire to give shape to the taste of the region.

When asked about Chef Sato, Kodaira-san replies, with a slight sense of bashfulness: “Every chef has their own preferences. Chef Sato explicitly chooses to use our meat, meaning he acknowledges its quality. As a producer, I am very happy that he shares our products with his customers,” conveying his sense of trust in the chef. We can’t wait for the participants of FoodCamp to share in the trust-based bond between these two!

Click here to register for membership, which is required to make reservations!
A membership is required for online applications and to make payments by credit card.